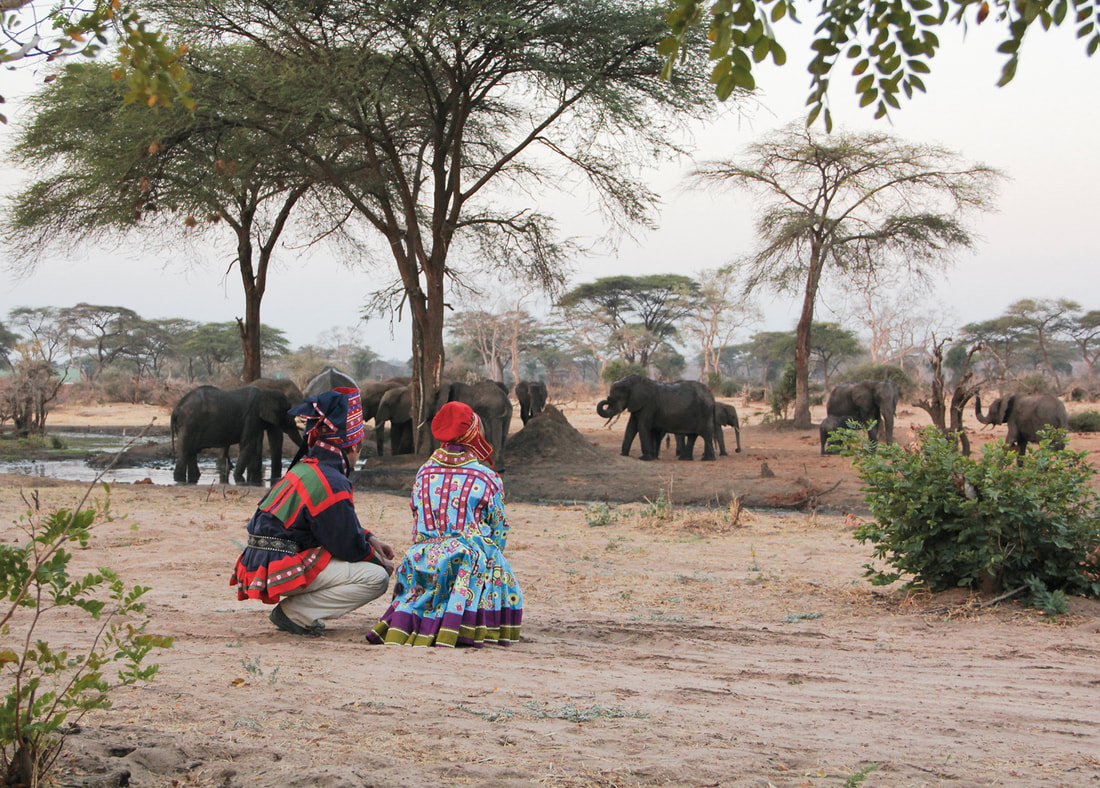 Senyati, Botswana, 2013, 90 x 130 cm
​Annika Dahlsten and Markku Laakso are visual artists from Finland. Together they work with photography, media art and performance. Dahlsten & Laakso have exhibited in various exhibitions and performed in festivals  both in Finland and abroad.
ANNIKA DAHLSTEN
Born 1975 in Vaasa.
Annika studied art at Turku Arts Academy and graduated from printmaking (BA 2003) and animation (BA 2016). She also studied at Koninklijke Academie voor Schone Kunsten, Antwerp, Belgium (1997) and Turku university (BA 2008). At the moment she works as an art advisor in Arts Promotion Centre Finland.
MARKKU LAAKSO
Born 1970 in Enontekiö, Hetta. Grew up in Koppelo, Inari.
Markku studied art in Turku Arts Academy and graduated from painting department. He has been active in art organisatorial field in South West Finland region. Sámi heritage is a part of Markku's heritage. Defining the Sámi identity has been a long process and a journey to his own history and persona. Thus it is also an inevitable part of his art work. 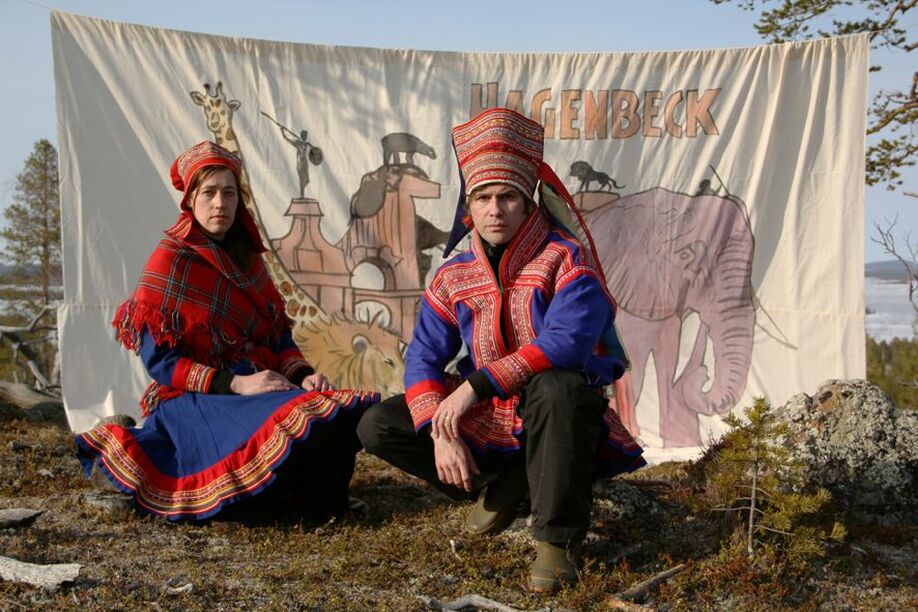 When I was little, sitting on the back seat of my father’s taxi, I would often hear the story of how my father’s grandfather, Simoni, had been an exhibit in a zoo. My child’s mind conjured up an image of my kinsman glaring out of a cage like an ape. The story later turned out to be true. At least partly.

Markku Laakso’s great grandfather Simoni Laakso, along with his family and reindeer, left Enontekiö in 1930 to take part a Sámi caravan and appear in German zoos. These ‘human exhibits’ put ‘othernesses’ – aboriginal peoples and tribes – on display to Europeans. The Laakso family travelled in Germany and lived in zoos for almost a year, entertaining spectators with their life in camp: spending time round the campfire, cooking and tending reindeer.

The photographs and videos follow the artists Annika Dahlsten and Markku Laakso as they travel from Lapland via Germany to southern Africa, investigating otherness and authenticity. The works open up viewpoints inherent in the background story on identity, indigenousness and belonging to a place. The performances take viewers along to an attempt to relive the zoo life. 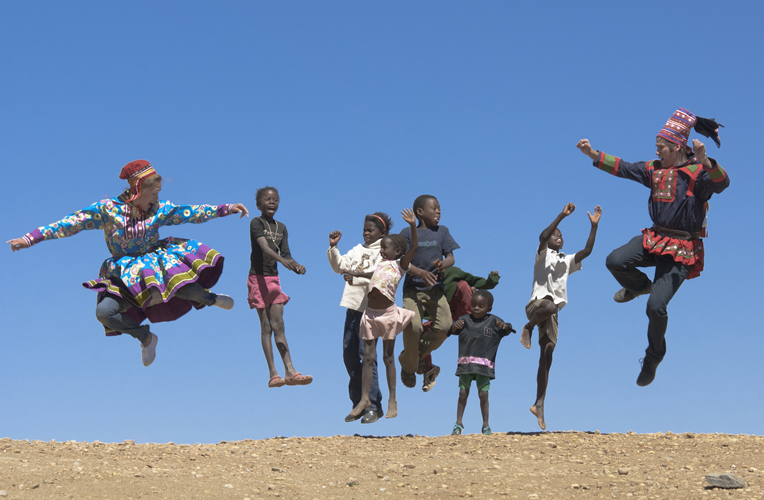 ”Jump in Diorama” focuses on the documentative nature of photography, on staging, and the questions of real and authentic. A photo displaying indigenous Sámi­looking people, elephants and wild nature is puzzling; it cannot be true. Yet it is documentation of a staged situation. ”Jump in Diorama” also explores the question of authenticity by asking who has the right to define what is authentic, who is real and when?

The artists have taken photos and shooted videos in various locations, including accidental passer­byes, humans and animals, in their pictures. They are wearing Sámi dresses: inherited, selfmade, or tailormade outfits. For them, this dress symbolizes questions of authenticity and origin. 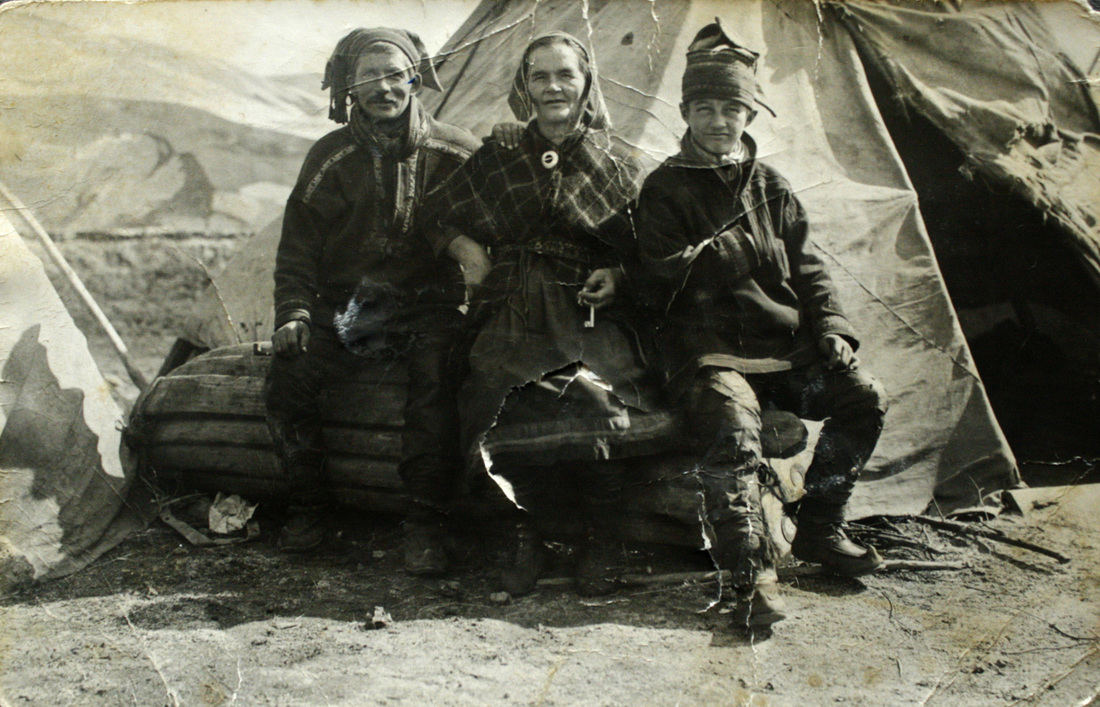 The projects  "Jump in Diorama" and "Campfire in the Zoo" are inspired by Markku Laakso's family history. In 1930, his father's grandparents, Simoni and Ella-Stiina Laakso, travelled to Germany  in order to be exhibited as Sámi in various zoos. The caravan consisted on 31 members from Finland, Norway and Sweden and travelled for eight months around the German zoos, in towns such as Berlin, Hamburg, Münich and Leipzig.

The job of the Sámi caravan was to show their own everyday life: to prepare food, do handicraft work, and drive reindeer and catch them with a lasso. Highlight of the daily show was a Sámi wedding. Performers were dressed in their finest Sámi dressed with fur coats, also in the hot days of summer.

Human exhibitions were a part of Europeans’ growing interest in foreign countries and cultures. Increasing numbers of private and public zoos were founded across Europe and America. The German wild-animal trader Carl Hagenbeck from Hamburg expanded his business to include the staging of human exhibitions. “Anthropological-zoological displays”, in which exotic tribespeople appeared together with animals, formed the basis for the ethnographic displays at world expositions.

Funfairs, circuses, and particularly zoos showed not only Sámi, but also, for instance, African tribespeople and Inuit. At least 30 Sámi groups are known to have toured Europe with their reindeer, from the 1870s on, right up to the 1950s.

For the Sámi themselves these caravans were not just a way of earning money, but also a chance to become acquainted with foreign cultures and to see the world. They set off on these tours voluntarily, unlike many of the representatives of aboriginal peoples from the colonies, who were dragged there by force, and kept virtually as prisoners. As racial theories were plunged into crisis, human exhibitions lost popularity. 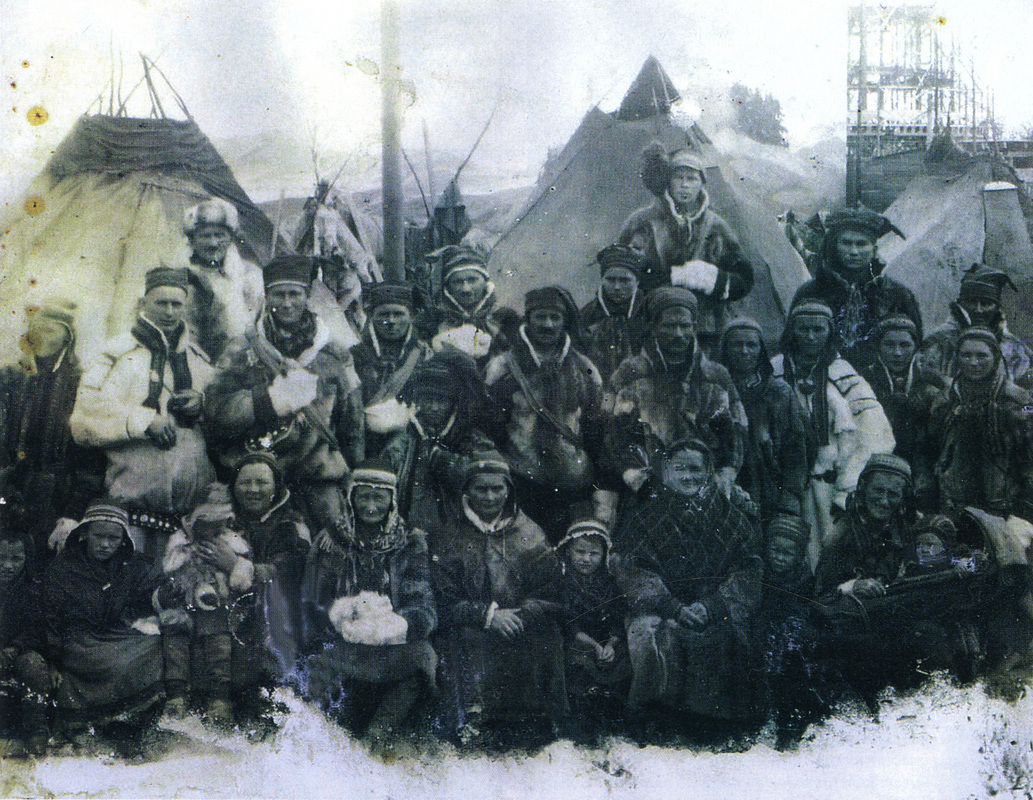